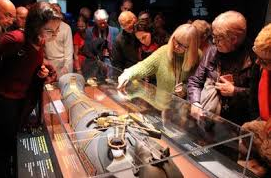 Be there at the world’s greatest discovery of ancient treasure and experience its wonder and excitement. Tutankhamun’s tomb, treasures and mummy are superbly recreated in this stunning exhibition seen by nearly two million visitors.

Visitors can experience the magnificence and mystery of the world’s greatest discovery of ancient treasure at The Tutankhamun Exhibition.

Tutankhamun’s tomb, treasures and mummy have been superbly recreated. It’s like stepping back in time almost 100 years and witnessing Lord Carnarvon and Lady Evelyn as they watch Howard Carter open a hole in the sealed door at the moment of discovery.

Hear their excited words, and then move into the ante-chamber filled with its wonderful treasures just as they saw them in 1922. Smell the pleasant odours of the funerary oils and unguents.

Then enter the burial chamber and witness the raising of the golden coffins from the quartzite sarcophagus, where the royal mummy had lain for over 3000 years. The whole scene is completed by audio commentaries and superb wall paintings.

Finally, some of Tutankhamun’s greatest golden treasures including the golden funerary mask and the exquisite harpooner are displayed in exact facsimile.