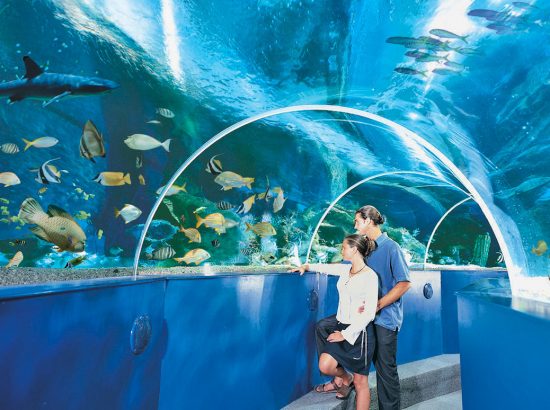 Blue Reef Aquarium Newquay is located at Towan Promenade, Newquay, Cornwall, and is a bewitching family attraction providing an all-year round family day out that the weather cannot spoil. It provides ticket holders with the chance to encounter local and exotic marine species in a giant 250,000 litre ocean tank with underwater tunnel and more than 40 multi-level displays.

Situated in the centre of Newquay, the family attraction is opposite the island and close to Towan Beach, and Blue Reef Aquarium Newquay is internationally recognised for its rescue work with stranded turtles. Turtle Creek features Mata Matas from Brazil, Mud turtles and endangered Pig-nosed turtles from Australia. Blue Reef Aquarium Newquay has rescued, rehabilitated and released three sea turtles, while its aquarists are involved in the breeding of turtles and scores of other species, having success in 2004 with the birth of the UK’s first captive-bred tropical stingrays. The family attraction’s nursery displays contain baby clownfish and seahorses, and other successes include sharks, pipefish, Bangaii cardinal fish and cuttlefish, while the Jelly Babies nursery focuses on jellyfish.

A family day out at Blue Reef Aquarium Newquay also takes in the centrepiece coral reef and its angelfish, puffer fish, cuckoo wrasse, giant groupers, black tip reef shark and moray eels. Among the family attraction’s more lethal inhabitants are stinging jellyfish, venomous lionfish and giant Pacific octopus, which have three hearts and the ability to change shape and colour. The Blue Reef Aquarium Newquay’s Amazing Octopus exhibition will astound ticket holders, as will the fact that one octopus can unscrew jam jars to get at food inside! Squid, cuttlefish, nautilus and argonauts are additional draws on a family day out with a difference, while other unusual species include giant conger eels, pipefish and ‘walking’ gurnards, as well as British sea bream and bass.

A ticket to Blue Reef Aquarium Newquay grants access to a host of crabs, including hermits and giant spider crabs, plus lobsters and cleaner shrimps, while displays of rockpools and deep-sea trenches explore the habitat of these amazing creatures.

Blue Reef Aquarium Newquay’s feeding demonstrations mean a varied, informative family day out, and children’s parties are catered for (as are other groups, including corporate entertainment). Parties include a tea and party bags, with themes like Finding Nemo, with a tour to spot characters from the film, including clownfish and their anemone homes.

The family attraction has a Kids Go Wild Tour, with ugh touch boxes, a rockpool visit and quiz trail, and there’s an Undersea Garden Tour taking in fauna, as well as a Rockpool Encounter and Shark Workshop. Just the ticket for a captivating family day out.